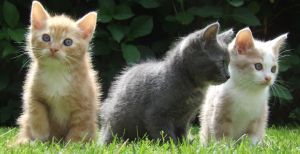 You are here: Home / Cat & Kitten / Kitten development and the importance of the “sensitive period”

The development of a kitten can be quite a rapid one with them going through many different stages within a matter of weeks from birth. By recognizing these stages, we as cat owners will be able to provide for their needs and help them forward in their physical and emotional growth.

Kittens are born both blind and deaf, but do posses a very strong sense of smell, thus enabling them to recognize their mother straight away, which will help guide them toward the nipples for their first feed. During the first week the kittens will do not much else but sleep and feed and by he end of the first week their body weight will have doubled from their birth weight, which is usually around three and half ounces.

By the end of the first week the kittens will start to open their eyes and will be able to hear and will start to move around a little but normally just to jostle for position at the nipple bar and will begin to knead at their mothers stomach to help stimulate the production of milk. This stage of life will last for about one month when they will start to produce their first teeth and will start to be encouraged by their mother to eat solid food. Kittens need very high quality food that is rich in nutrients to aid their fast growth and will need to be fed lots of small meals through out the day.

The first seven weeks of a cats life is called the “sensitive period” as this is the time when they are most open to new experiences and are likely to learn from them. They also have no fear during these first weeks and so can be exposed to many new experiences without causing any stress to the kitten. It is during this seven-week window that it is important that they are socialized to humans and other pets, and are exposed to many different noises and experiences. This will produce a kitten which will grow up to be a very confident and friendly cat and will fit in very well in today’s hectic modern family.

Socialization should include plenty of handling by at least four different people of all sexes and ages. Coming into contact with children at this early stage is very important if they are to live in a family situation consisting of many children. Positive experiences and gentle handling will remove any apprehension later on in their development. Also contact with other animals like the family dog should be encouraged but always supervised, in case Fido thinks this ball of fur is a new toy to play with. Again this early introduction will help bond the animals and remove any aggression during future encounters.

During the second and third month of life, play hunting and fighting is the main order of the day, with the mother cat supervising and showing the way. Kittens will learn many valuable lessons from their mothers during this time and certain boundaries will be taught which will also help their relationship with humans. For instance the mother cat will teach kittens the difference between play and hunting, by admonishing rough play. The mother cat will also begin to bring live prey to her kittens to teach them hunting and predatory skills. However, even if a kitten is not taught to hunt they will still develop the skills later on as it is one of the strongest instincts in cats and so can never be untaught by us disapproving humans.

Between the third and six month a kitten’s development starts to really move forward at a rate of knots. They will stop feeding from their mothers completely and will become totally reliant on solid food. They will loose their milk teeth and begin to explore their new world more earnestly. Scenting their new territory starts to become an issue as they move into sexual maturity. A cat can become pregnant from as young as six months old and so it is important that owners arrange to have their kittens neutered around this time.

At six months old the kitten is totally self-reliant and will not look towards their mother for any support. In fact in some cases especially if the other cat is pregnant again she will begin to act aggressively towards her kittens to push them away and encourage them to find new territory. The kitten will continue to grow until they are about a year old at which time their food should be changed from the kitten variety to an adult formula, as they will need different balance of nutrients to maintain good health. Feeding should now be reduced to two or three meals a day to prevent weight gain.

Kate and her partner co-write www.our-happy-cat.com, a site full of further cat care and cat health topics, as well as being a feline friendly community site for a happy cat and a happy owner.